Many 2007 to 2013 Chevy Tahoe owners have complained about a cracked or cracking dashboards, usually above the passenger airbag and on the steering column cowling. While this issue is mostly cosmetic, there's a possibility that the cracked dash could be a safety issue in an accident. Therefore, it's a good idea to repair the cracked dash at your first opportunity.

What Causes a Dashboard to Crack?

Most people attribute the dashboard cracks found in the Tahoe to a manufacturer’s defect. A few think that over-tightening of the bolts is the culprit, and others think it’s just because GM used cheap plastic. There was actually a class action lawsuit against GM, but nothing came out of it except a rumor that some GM dealerships are offering to cover half of the dashboard repair costs.

If you’re a Tahoe owner experiencing this problem, you might be better off just fixing this by yourself. It’s an easy job that will take an hour or two. In a nutshell, you have to remove the dashboard and then make surface repairs by sealing the crack shut.

This solution only works on small cracks, though. For bigger cracks, you're better off replacing the entire dashboard.

We’re going to show you how to remove the dashboard from your Tahoe and fix it in 5 steps: 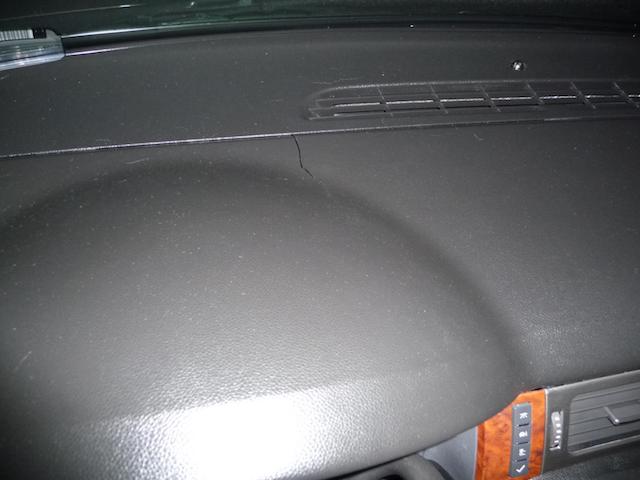 A dashboard crack on the driver’s side in a 2007 Tahoe, via Chevrolet Forum member bamafutbal

This step requires disconnecting a lot of wires and unscrewing a lot of bolts. It’s much easier with the right tools, like a plastic auto interior trim tool kit that allows you to remove all of the trim without breaking or scratching anything.

This comprehensive YouTube tutorial offers great instructions on removing the dashboard in a Tahoe. Here's a quick list of steps:

You may want to consider replacing a few parts under the dashboard while you have it off. A few suggestions:

2. Close the Cracks With a Hot Plastic Staple Gun

First, ensure that the hot staple gun you have can be used on plastic. Turn the dashboard over and use the hot staple gun to melt the staples across the crack. The staples should be positioned about half an inch apart. The point of this step is to close up the crack. However, this is not enough to keep the crack closed, so you’ll need to actually seal it up.

3. Lay a Few Pieces of Metal Wire Across the Crack

You want to grab some galvanized steel wire or something similar, as long as it’s strong enough to hold the crack together. Cut the wire into 5” pieces and lay them perpendicularly across the crack. You want them to be about half an inch apart. Don’t lay any of them directly above the staples.

Grab some epoxy adhesive and generously cover the crack, the staples, and the wires with it. Ensure that you get as much of it as possible on the dashboard itself.

5. Let it Dry and Then Put the Dashboard Back On

Give the epoxy 24 to 48 hours to dry. At this point, the crack should be barely visible and that area should be sturdier than ever.

Just because the class action lawsuit didn’t work out doesn’t mean that this is a lost cause. The more NHTSA (National Highway Traffic Safety Administration) hears about this, the more likely they’ll intervene. Head over to Safercar.gov and file a complaint. They take all complaints seriously, so it’s well worth your time.